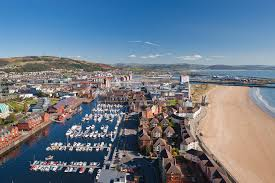 Swansea is, officially at least, the Second City of Wales behind Cardiff. There is a great rivalry in sport and success between these two great conurbations that see them locked in a struggle for years. Situated along the M4 corridor they both sit on the South Coast of Wales looking out over the Bristol Channel. It is a vibrant place that has grown out of its natural position with its geography. When coal was king this port of Swansea and it’s links to carry the black gold up to Bristol for rail distribution to London or be sailed around to Liverpool and Belfast where the great docks for the shipbuilding industry lay made it grow. The other raw material that made it great was the receiving of Copper it got from overseas. At one point it was nicknamed “Copperopolis” as businesses and the rural Welsh farmworkers flooded to the area for work that was better paid but more dangerous to health and well being. This copper for  smelting came from Devon and Cornwall over the Severn Sea and even as far as Africa and South America. Now the industry is gone. New ones have replaced it and living there is highly recommended. Getting a Building Survey is no issue. This industry and flair for the cosmopolitan from the overseas trade has given its people a sense of pride and independence. In Rugby Cardiff and Swansea regularly do battle for supremacy at all levels of the game. National pride is suspended for the sake of the locals. The two football teams try to outdo each other in the Football league.